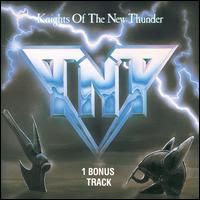 Knights of the New Thunder is the second studio album by the Norwegian heavy metal band TNT. It was the first TNT album recorded with their new vocalist Tony Harnell, who had replaced their original singer Dag Ingebrigtsen.

Most of the songs on the album had been written and recorded as demos while Ingebrigtsen was still in the band, but most of the lyrics were rewritten by Harnell. Two songs from TNT's self-titled first album, "USA" and "Eddie", were re-recorded and included on the album, though "Eddie" was an exclusive bonus track on the CD edition in Europe,[2] and replaced "Tor with the Hammer" on U.S. editions. "Eddie" also came on the single American Tracks bundled with the LP in Europe.[3]

This was their last album playing traditional heavy metal, as their later releases have a more glam metal style.

The album's original cover art featured an illustration of half-naked women and caused controversy in Norway. A new cover was made and used for the national and international editions, except for Japan where the album was released with its original cover