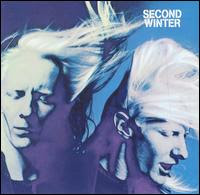 John Dawson Winter III (February 23, 1944 – July 16, 2014), known as Johnny Winter, was an American musician, singer, songwriter, multi-instrumentalist and producer. Best known for his high-energy blues-rock albums and live performances in the late 1960s and 1970s, Winter also produced three Grammy Award-winning albums for blues singer and guitarist Muddy Waters. After his time with Waters, Winter recorded several Grammy-nominated blues albums. In 1988, he was inducted into the Blues Foundation Hall of Fame and in 2003, he was ranked 63rd in Rolling Stone magazine's list of the "100 Greatest Guitarists of All Time".

Second Winter is the third studio album by Texas blues guitarist Johnny Winter, released in 1969. The original plan was to edit the songs from the recording session into one album but it was later thought that all the recordings were good enough to be released. The album was released as a "three-sided" LP, with a blank fourth side on the original vinyl. Two more songs, "Tell the Truth" and "Early in the Morning" were left unfinished but released on a 2004 re-release of the album.