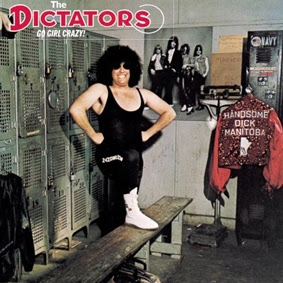 Go Girl Crazy! is the debut album by American punk rock band The Dictators. It was released on March 1975 and is considered one of the first examples of punk rock.

The album has been well-received critically and is considered a precursor to punk rock. In its retrospective review, AllMusic notes that while the album was confusing to audiences at the time of its release, it became inspirational for dozens of groups to follow. Trouser Press also enthuses that the band deserves "scads of credit" for "blazing a long trail, melding the essentials of junk culture...with loud/hard/fast rock'n'roll and thus creating an archetype". According to a 2001 article in the Village Voice, the album's "blueprint for bad taste, humor, and defiance" has been replicated in the work of such bands as the Ramones and Beastie Boys. Trouser Presslauded the album a "wickedly funny, brilliantly played and hopelessly naïve masterpiece of self-indulgent smartass rock'n'roll".[8]Entertainment Weekly wrote "Go Girl Crazy's junk-generation culture and smart-aleck sensibility did provide an essential blueprint for '70s punk. With its TV references and homely vocals, this ground-breaking and long-unavailable album continues to inspire underground groups everywhere." Canadian journalist Martin Popoff enjoyed the album and considered the Dictators "more obviously comedians than musicians", "with a sense of self-deprecating humor poking sticks at the seriousness of heavy metal"