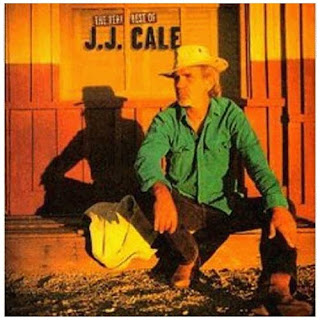 John Weldon "J. J." Cale (December 5, 1938 – July 26, 2013) was an American singer-songwriter, recording artist and guitarist. Though he deliberately avoided the limelight (being temperamentally averse to celebrity)[2] his influence as a musical artist has been widely acknowledged by figures such as Mark Knopfler, Neil Young and Eric Clapton, who described him as "one of the most important artists in the history of rock".[3] He is considered to be one of the originators of the Tulsa Sound, a loose genre drawing on blues, rockabilly, country, and jazz.

Many songs written by Cale have been recorded by other artists, including "After Midnight" and "Cocaine" by Eric Clapton; "Call Me the Breeze" by Lynyrd Skynyrd, John Mayer, Johnny Cash and Bobby Bare; "Clyde" by Waylon Jennings and Dr. Hook; "I Got The Same Old Blues" by Captain Beefheart, Lynyrd Skynyrd and Freddie King; and "Magnolia" by Beck, Lucinda Williams, Iron and Wine, Jose Feliciano and Ben Bridwell.

In 2008 he, along with Clapton, received a Grammy Award for their album, The Road to Escondido. 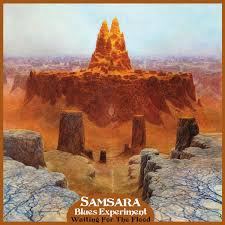 Samsara Blues Experiment is a German band formed in 2007 by guitarist Christian Peters, as he left Terraplane
In spring 2008 the lineup was completed from various Berlin underground bands with guitarist Hans Eiselt, bassist Richard Behrens and drummer Thomas Vedder
Styles range from stoner, psych and folk influences to raga. 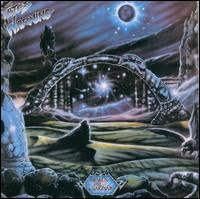 Fates Warning is an American progressive metal band, formed in 1982 by vocalist John Arch, guitarists Jim Matheos and Victor Arduini, bassist Joe DiBiase, and drummer Steve Zimmerman in Hartford, Connecticut. Their early work was heavily influenced by new wave of British heavy metal, and was key in the development of American power metal.With each work the band developed into a pure progressive metal style. Fates Warning has experienced numerous line-up changes. From 1982 to 1996 — and temporarily in 2010 — Matheos and DiBiase were the only remaining original members of the band, with Matheos being the only constant member. Their current lineup consists of guitarists Jim Matheos and Frank Aresti, vocalist Ray Alder, bassist Joey Vera, and drummer Bobby Jarzombek. As a pioneer of the American progressive metal movement, Fates Warning rose to international fame in the 1980s and was ranked as one of the early "flagship bands of progressive metal" along with Queensrÿche, Dream Theater, Crimson Glory and Watchtower, who were responsible for creating, developing and popularizing that genre.

Fates Warning has released twelve studio albums, two live albums, one compilation album, one VHS, three DVDs (each of them features live concerts) and four demo tapes. The band experienced major American commercial success with the 1986 release of their third studio album, Awaken the Guardian, which peaked at number No. 191 on the Billboard 200, and became the first album released on Metal Blade to enter that chart. Their next three albums, No Exit (1988), Perfect Symmetry (1989) and Parallels (1991), were also successful; the first two peaked at No. 111 and No. 141 on the Billboard 200 respectively. Fates Warning's most recent studio album, Theories of Flight, was released on July 1, 2016. 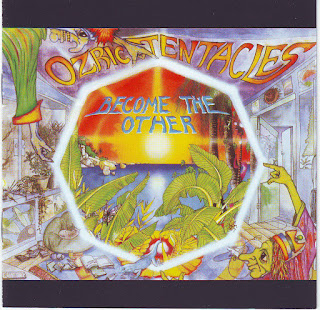 Ozric Tentacles are an instrumental rock band from Somerset, England, whose music can loosely be described as progressive or space rock. Formed in 1983, the band has released 26 albums as of 2015, and became a cottage industry selling over a million albums worldwide despite never having major label backing.[1] Throughout many line-up changes over the years, guitarist Ed Wynne has remained the only original member of the band. 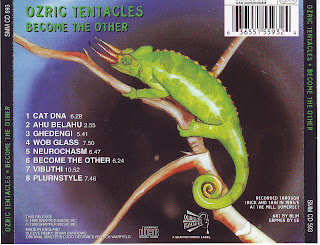 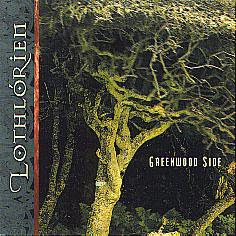 Lothlorien was formed in early 1996 and since its formation has played regularly at various Auckland folk clubs, with guest appearances at Devonport, Titirangi, Tir na N'og, East Coast and Troubadour folk clubs, and has also been in regular demand for weddings and functions.
During 1997 Lothlorien and invited guests held a number of concerts at Auckland's Pumphouse Theatre, under the title of 'Celtic Voices'.  These drew enthusiastic full house audiences each time.

In 1999, Lothlorien performed at the Auckland Folk Festival 'Invitation Concert', at Tir na N'og again in August 1999, and returned to the Katikati Folk Club in November (a fantastic night).

In January 2000, at the Auckland Folk Festival, Lothlorien appeared again, this time as festival guests!  At the same time we also released our first album, called 'Greenwood Side'.  (See our 'Recordings' page for details of the album).  The combination of these two big events definitely made a 'career highlight' for the band!

Lothlorien were guest artists yet again at Tir na N'Og on Saturday March 25, and performed yet another concert at the Pumphouse - 'Celtic Voices 2000' - with additional special guests  on Saturday 1 April 2000.
And last but not least,  Lothlorien returned to the Titirangi Folk Music Club for the May guest spot, which was thoroughly enjoyed by all concerned!

Lothlorien in Cyberspace! Lothlorien joined mp3.com in late March 2000, and towards the end of July most of their album tracks ascended the Celtic charts, remaining in the top 40 throughout August and into September, including three songs reaching the NUMBER ONE spot! (Ghostwood, Siuil a Ruin and The Black Cat).
Lothlorien's album 'Greenwood Side' won the Folk album of the year in the 'Tui' New Zealand Music Awards for 2001. (The 'Tuis's are New Zealand's equivalent of the 'Grammys').

Since then Chris and Nicole have had two children and produced and engineered a number of albums for other artists in the Ghostwood Studio. These artists include Ross Hill, Roger White and Celtic band 'Tamlin' (featuring Greg and Linda who played on 'Greenwood Side'). Tamzin Wood has just released 'Lucky', her first solo album, which was also recorded in Ghostwood Studio.

This album is in a Celtic folk style and would appeal to fans of Clannad, Enya and Loreena McKennitt.

The 'Greenwood Side' album was recorded by us in our own studio during 1999 and released in January 2000. 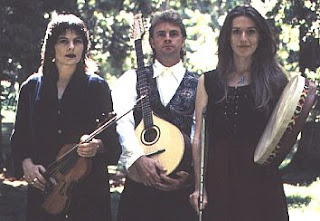 A Breton dance tune we were inspired to learn from a recording by Irish flute player Laurence Nugent.

3 She Moved Through the Fair (trad. arr. Lothlorien)

A well-known classic love song/ghost song. The theme was used by rock group Simple Minds in their song 'Belfast Child' which is hinted at here.

A young boy dreams of adventure at sea, then discovers that life on a fishing trawler is considerably tougher than he expected.

'Heave away upon the capstan, give a hand to heave the trawl'.

One of many folk songs in which a sailor returning from sea after many years absence disguises himself to test the loyalty of his bride-to-be. It is sometimes known by the title 'Little Mary the Sailor's Bride'.

This original jig was written by Chris and Nicole, inspired by the books of fantasy author Charles de Lint which feature the Celtic 'Otherworld'.

7 Siuil a Ruin (trad. arr. Lothlorien)
In this song, a girl laments the leaving of her love who has gone to join the army, as she believes she will never see him again. The lyrics of the chorus are in Irish Gaelic.

A tragic tale of children born out of wedlock and the extreme measures taken by the mother to avoid bringing disgrace upon herself and her family. This song has many variants, some of which are also known as 'Greenwood Side'.

This Schottische appears in the Encyclopaedia Blowzabellica, a collection which includes many weird and wonderful tunes.

An original song written by Tamzin, which describes the consequences of taking the advice of others rather than following one's own heart.

11 A-Souling (trad. arr. Lothlorien)
This song has become well-known in local folk circles through the singing of Terry Free, however Tamzin also heard it many years ago when her parents sang it together. It describes an old tradition similar to the 'trick-or-treat' we know today.

Apple, a pear, a plum and a cherry, any good thing to make a soul merry

One for Peter, two for Paul, three for Him who made us all'

This original tune was initially composed as a jig, and was later reinvented as a slow air. It was inspired (obviously) by a special black cat. 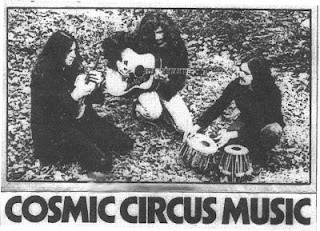 Cauldron Born - Born Of The Cauldron 1997 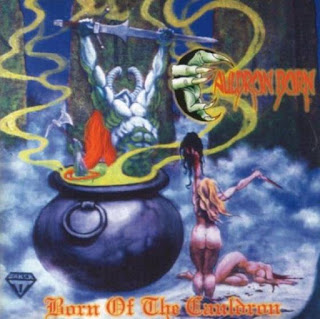 Named after the Cauldron Born from Lloyd Alexander's The Prydain Chronicles novels.
The Cauldron-Born were deathless warriors made from dead bodies stolen from barrow mounds by Arawn Death-Lord, and revived in the Black Crochan. They served Arawn unquestioningly, though during the events of The Book of Three, a few Cauldron-Born were also under the command of Achren, possibly because she was serving Arawn at the time.


The deathless warriors were based in the Hall of Warriors in Annuvin, where the Crochan was also kept until its disappearance during the events of  The Black Cauldron 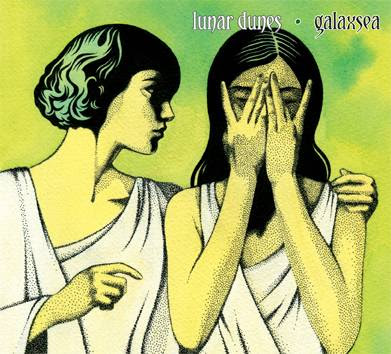 Lunar Dunes biography
Born out of 100 years of passionate listening and a shared love of Coltrane, Krautrock and the many and varied eccentricities of English Psychedelia, 'From Above' is a record with many antecedents but precious few contemporaries.

Emerging from the landscape of Iker Spozio's other-worldly cover painting (itself an echo of the Nubian utopia created by Mati Klarwein for Miles Davis) through to the final idiot funk spasms of 'Scatter', the Lunar Dunes' debut album is that very same pagan yawp - seventy five minutes of Looney Tunes and Merrie Melodies that would have Bugs and Tweety cranking up their JBL 100s at the drop of an ACME anvil.

Lunar Dunes clearly know their 'Live Evil' from their 'Wolf City' but this record offers no hiding place for the oldies fetishist. Recorded in three days, edited and mixed in four, the Lunar Dunes come out sounding at once wholly modern and thoroughly European. Shifting from cacophonies of noise and horror to elongated drifting cadences where time becomes space, here is living proof that the making of truly psychedelic music requires less the ingestion of hallucinogens and more by way of imagination, a love of the form and a disregard for the rulebook.

With three hours of music on tape the selection process that produced this double album was pretty straight forward - anything that sounded too much like something they had heard too often before went straight on the cutting room floor. In the words of John Sinclair, a man with more than a passing acquaintance with rock and roll as chaos theory, they will either "make you feel it or leave the room".

It is wholly fitting that what is, at times, a confusingly contradictory record should be created by three people whose shared personal histories go back thirty years, but who had barely spent thirty hours playing together before making their debut album.

If you can detect some Faust here, a little of 'The Who Live At Leeds' there and the simultaneous holographic presence of Elvin Jones, Tina Weymouth, Hariprasad Chaurasia and even Mick Bolton's UFO then you too are riding down Titan's magic mountains with Saturn's rings visible just out the corner of your eye.

'From Above' - Space Rock without the simulator and available right now from a kosmische kiosk near you.