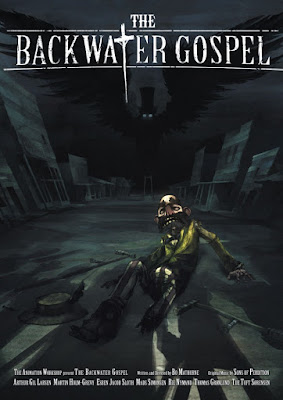 Backwater is doomed by the regular visits of the undertaker and its dwellers blame a tramp. 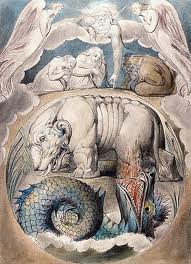 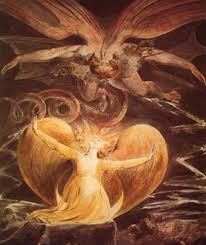 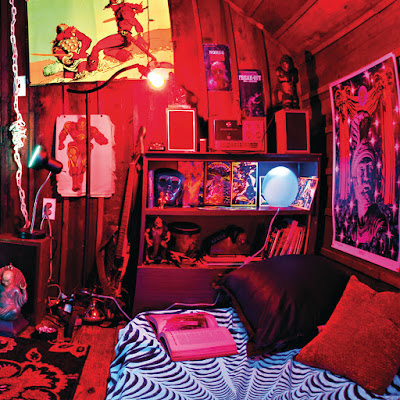 Monster Magnet is an American stoner rock band. Hailing from Red Bank, New Jersey, the group was founded byDave Wyndorf (vocals and guitar), John McBain (guitar) and Tim Cronin (vocals and drums). The band first went by the names "Dog of Mystery", "Airport 75", "Triple Bad Acid" and "King Fuzz" before finally settling on "Monster Magnet", taken from the name of a 1960s toy made by Wham-O, which Wyndorf liked when he was a child 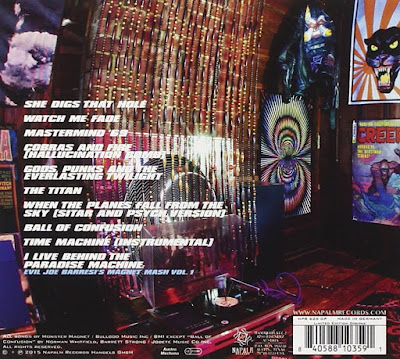 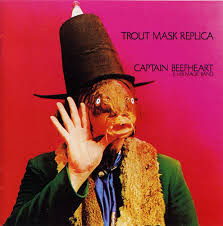 Trout Mask Replica is the third album by Captain Beefheart and his Magic Band, released in June 1969. Produced by Beefheart's friend and former schoolmate Frank Zappa, it was originally released as a double album on Zappa'sStraight Records label. Combining elements of blues, avant-garde, free jazz and other genres of American music, the album is regarded as an important work of experimental music.

Most of Trout Mask Replica was recorded in March 1969 at Whitney Studios in Los Angeles, California. The lineup of the Magic Band at this time consisted of Bill Harkleroad and Jeff Cotton on guitar, Mark Boston on bass guitar, Victor Hayden on bass clarinet, and John French on drums and percussion. Beefheart played several brass and woodwind instruments (including saxophone, musette, and hunting horn) and contributed most of the vocal parts, while Zappa and members of the band provided occasional vocals and narration. The well-rehearsed Magic Band recorded all instrumental tracks for Trout Mask Replica in a single six-hour recording session; Van Vliet's vocal and horn tracks were laid down over the next few days. Upon release in the US, Trout Mask Replica sold poorly and failed to chart. It was more successful in the UK, where it spent a week at #21.

Today, Trout Mask Replica is widely regarded as the masterpiece of Van Vliet's musical career, as well as one of the most influential rock albums ever recorded. The album's highly unconventional musical style, which includes polyrhythm, multi-octave vocals, and atonality, continues to polarize audiences, and has contributed to its reputation as one of the most challenging recordings in the 20th century musical canon. It ranked #60 on Rolling Stone's 500 Greatest Albums of All Time list (2012), and appears on many similar lists. Allmusic's Steve Huey wrote that "its inspiring reimagining of what was possible in a rock context laid the groundwork for countless future experiments in rock surrealism, especially during the punk/new wave era."
from wiki 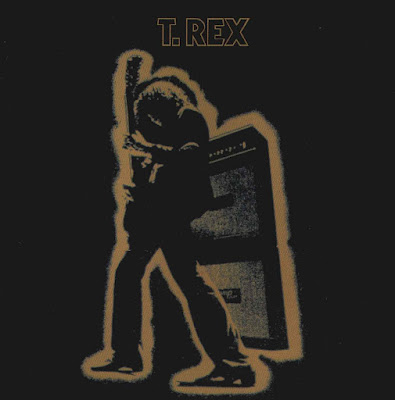 T. Rex were an English rock band, formed in 1967 by singer-songwriter and guitarist Marc Bolan. The band initially called Tyrannosaurus Rex, released four folk albums under this banner. In 1970, Bolan began to make a shift from basing his band's sound around an acoustic guitar to basing it around an electric one and shortened their name to T. Rex. "Ride a White Swan" coincided with this change and instantly became a commercial success. From 1970 until 1973, T. Rex encountered in the UK a popularity unseen since the demise of theBeatles, with a run of 11 singles ranked in the British top ten. 1971's Electric Warrior received sustained critical acclaim as a pioneering album of glam rock. It reached the number 1 position in the UK. The follow-up, 1972'sThe Slider, allowed the band to enter in the top 5 in the USA. At the end of 1973, T. Rex started to have less commercial success but kept on recording one album per year.

In 1977, Bolan died in a car accident a couple of months after releasing their final studio album Dandy in the Underworld. Since then, T. Rex have continued to exert a vast influence on a variety of subsequent artists.

Electric Warrior is the sixth studio album by English glam rock act T. Rex (being the second album under the name "T. Rex", with the first four billed as "Tyrannosaurus Rex"). It was released on 24 September 1971 by record label Fly in the UK and Reprise in the US. The album marks a turning point in the band's sound, dispensing with the folk-oriented music of the group's previous albums and pioneering a new, "glammier" style of rock known as glam rock.[1] The album also drew attention to the band in the United States with the top 10 hit "Bang A Gong (Get It On)". This would prove to be the band's only successful single in America, deeming the band a "one-hit wonder" there. 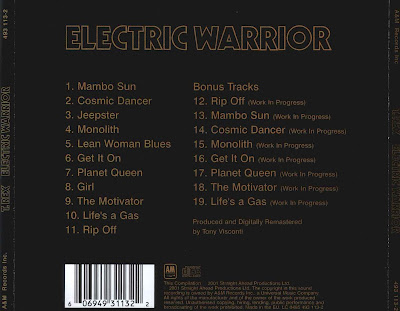 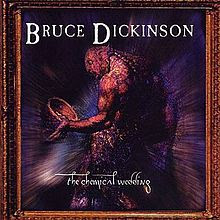 The Chemical Wedding is the fifth solo album by English heavy metal singer Bruce Dickinson, released on 14 July 1998 through Sanctuary Records. The record draws some inspiration from the works of William Blake, featuring sung and spoken excerpts of his prophetic works and poetry (notably And did those feet in ancient time on the track Jerusalem), and with cover art from his painting The Ghost of a Flea, although the name of the album and its title track derive from the Rosicrucian manifest the Chymical Wedding of Christian Rosenkreutz. As with the previous album, it featured Iron Maiden guitarist Adrian Smith, then a member of Dickinson's solo outfit.

The film, Chemical Wedding, with a screenplay by Dickinson, was released in May 2008. It features the title track from the album on its soundtrack, but concerns a story about the reincarnation of Aleister Crowley and is otherwise unrelated.
download 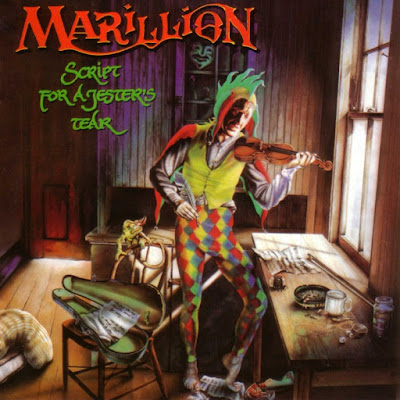 Script for a Jester's Tear is the debut studio album by the British neo-progressive rock band Marillion, released in 1983. Produced by Nick Tauber, it was recorded between December 1982 and February 1983 at The Marquee Studiosin London. The album was a commercial success peaking at number 7 on the UK Albums Chart and eventually going Platinum.

Script for a Jester's Tear was intended to be part of a trilogy along with the next albums, Fugazi (1984) and Misplaced Childhood (1985).

This is the only Marillion album featuring drummer Mick Pointer who later became a founding member of the neo-progressive rock band Arena.
Songs / Tracks Listing 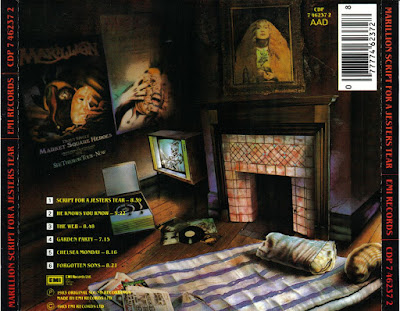 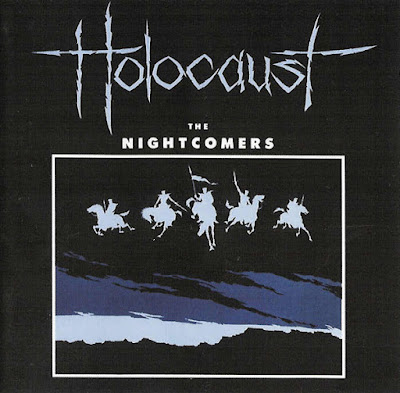 The Nightcomers is the debut studio album by British heavy metal band Holocaust, released in 1981 at the apex of theNew Wave of British Heavy Metal phenomenon. The album was released by Holocaust's own label Phoenix Record And Filmworks and re-issued on CD by Edgy Records only in 2000. It was remastered and re-issued as a double CD byCastle/Sanctuary in 2003, including all the tracks from the "Smokin' Valves", "Heavy Metal Mania", and "Coming Through" singles and from the Live from the Raw Loud 'n' Live Tour EP. 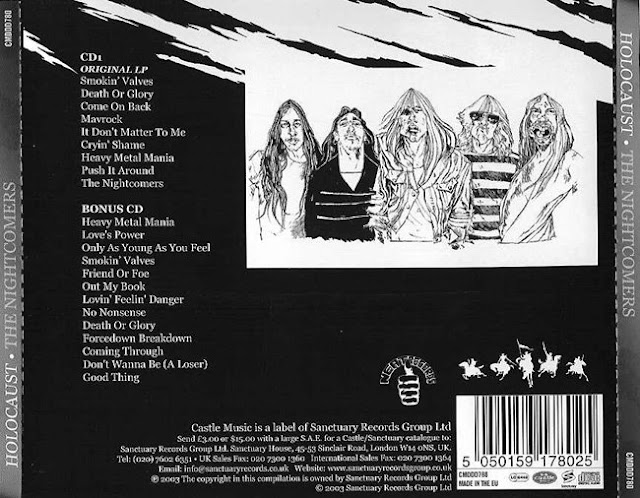 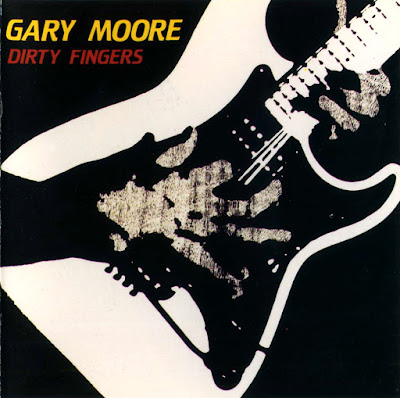 Dirty Fingers is an album by Gary Moore. It was recorded in 1981, shortly after disbanding G-Force and released in 1983 in Japan, where Gary was extremely popular, and 1984 in Europe. The song "Nuclear Attack", written by Moore, had previously appeared on Greg Lake's eponymous debut album, on which Moore played guitar.


Although he'd probably beg to disagree, Gary Moore's worst enemy throughout his career has arguably been his own eclecticism; a distinct lack of focus which has regularly seen him swinging back and forth between the roles of heavy metal guitar hero and blues purist (and everything in between: Irish folk music, jazz fusion, you name it). And while the second half of his career saw him capable of focusing on both the blues and hard rock/metal with some consistency, 1984's Dirty Fingers is very much a document of those early, restless years. Originally recorded in 1980 but shelved in deference to the far more radio-oriented material released in its stead as the one-off G Force album that same year (yes, another detour by Moore), Dirty Fingers' tracks are generally characterized by a raw, uncompromising heavy rock aesthetic -- hence the title. As such, tough, virile rockers invariably slathered in frenetic six-string fretwork abound (see "Hiroshima," "Kidnapped" "Lonely Night") but, with the exception of the unapologetically nasty "Run to Your Mama," these tend to fall well short of the material heard on 1979's Back on the Streets and its "official" successor,Corridors of Power, three years later. A cover of the Animals' "Don't Let Me Be Misunderstood" is similarly lackluster; "Rest in Peace" is just another example of Moore's typically bland '80s balladry; "Really Gonna Rock" sounds like an early version of "Rockin' Every Night"; and the one-minute title track is merely a sketch for the electrifying solo later used to introduce Corridors of Power's epic "End of the World" (for which this album's "Bad News" was partly cannibalized, as well). But there is at least one other career highlight to be found on Dirty Fingers, and that's the bombastic "Nuclear Attack" (yet another of Moore's apocalyptic warnings), which, amid massive riffs that keep it rocking like a motherf**ker, unveils a simple but effective counterpoint synthesizer theme that one could very well assume inspired Europe to write "The Final Countdown." Also know that most of the above find Mooresharing lead vocals with former Ted Nugent singer Charlie Huhn for the first and final time, and you'll have all you need to know about Dirty Fingers -- an interesting but not essential Gary Moore album.
Track Listings: 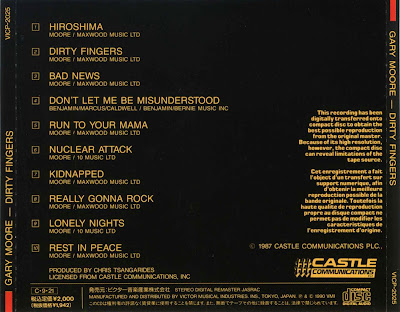 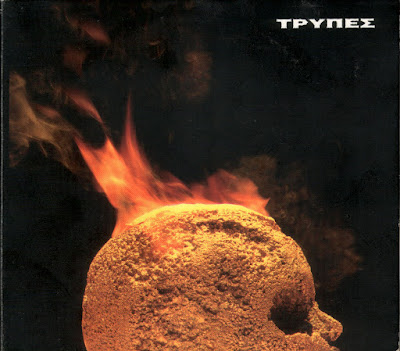 Trypes (Greek: Τρύπες), which translates in English as "Holes" were a highly influential and acclaimed Greek rockband, originating from Thessaloniki, Greece. Their unique sound emerged mainly from the combination of vocalist Giannis Aggelakas' distinctive singing style and lyrics and Giorgos Karras' Post-punk and Alternative Rockinstrumentation. They have produced landmark albums like Enia pliromena tragoudia (Nine paid songs) and Kefali gemato chrysafi (Head Full of Gold) which not only were commercially successful, but are also considered to bemasterpieces of Greek Rock discography. 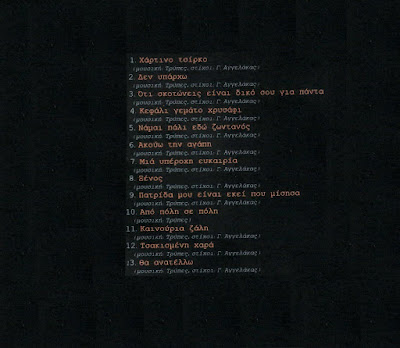 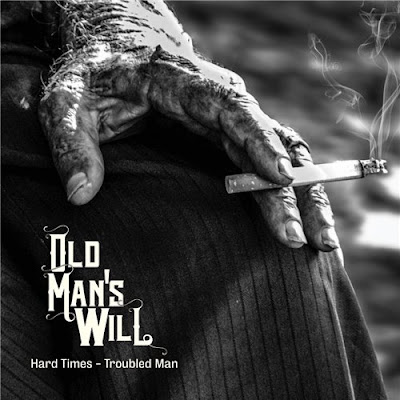 Swedish quartet Old Man’s Will are just getting set to release their sophomore album, but from a listen to the first single from the album, this album could be carbon-dated from the early ’70s. Drawing influence from bands like Deep Purple and Free, the band was discovered by Riding Easy from their Soundcloud, and the label asked to reissue their first album. Calling the new one, Hard Times – Troubled Man, a step in the classic rock direction, the band’s guitarist, Klas Holmgren, describes their first single and semi-title track, “Troubled Man,” which we’re debuting today:

“Basically, it’s about being a creative musician today and the life around it. Musicians and creative people are unique, and they’re troubled. Sometimes, the more troubled you are, the closer you are to writing that magicAn ordinary life just can’t compete. Playing rock music today means big sacrifices and insane amounts of work with barely no return, but we love what we do and we don’t trim our sails to the wind.”