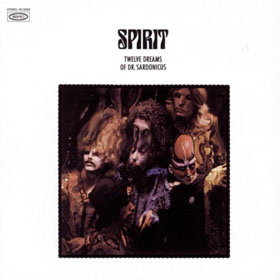 Twelve Dreams of Dr. Sardonicus is the fourth album by the American psychedelic rock group Spirit. It was produced by David Briggs, who is best known for his work with Neil Young. The original LP was released in 1970 by Epic. The band's lowest charting album to that point, it peaked at #63 on the Billboard 200 in February 1971, spending only fourteen weeks on the chart. However, it sold well as a catalog item and became the band's only album to ultimately attain a RIAA gold certification in the U.S., achieving that status in 1976.[3]On the Canadian RPM Magazine Top 100 charts, the album reached #49 and was in the top 100 for 10 weeks.[4]

"Nature's Way" became one of Spirit's signature songs, but was not a big hit at the time, peaking at #111 on the Billboard pop charts in 1971. To capitalize on the album's enduring appeal, "Mr. Skin" (the B-side of "Nature's Way") was released as an A-side in 1973 and also charted, peaking at #92.

The album was re-issued on CD in 1996 by Sony in remastered form, with bonus tracks.