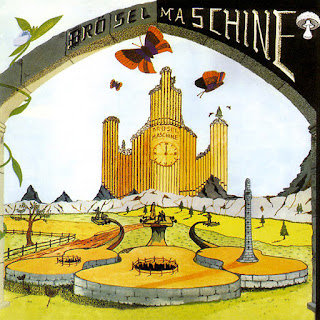 Quite possibly the pinnacle of Krautfolk, Broselmaschine is certainly tops in the folk subgenre and is recommended to those interested in the lighter side of Krautrock. Broselmaschine combines the highly talented acoustic guitar playing of Peter Bursch (a master of the instrument who has published many instructional books on the subject), romantic vocals, and a mild Eastern influence highlighted by the use of sitar and flute. The album begins with 'Gedanken', a peaceful track with a slight renaissance-era feel, featuring acoustic and electric guitar, flute and romantic lyrics. Next the group performs the Scottish traditional 'Lassie' with multi-tracked vocal harmonies. Next, 'Guitarrenstuck', is a beautiful piece played with folk guitar and a soothing female vocal. 'The Old Man's Song' seems slightly out of place due to its use of wah-wah peddle, but this gives way to some rather ominous sounding Duul-ish acoustic guitar and folk percussion. 'Schmetterling' introduces an Eastern flavor to the album and is most notable for its sitar which reminds me a little bit of mid-period Popol Vuh. Bursch's guitar playing on this track is simply masterful and the track is given an extra boost from some atmospheric mellotron. 'Nossa Bova' stands out as a folk masterpiece with its incredible guitar work, folk percussion, and female vocals. This track has a peaceful quality similar to Paradieswarts Duul, the only difference being the musical ability of Broselmaschine's members. The album was produced by Rolf Ulrich Kaiser and engineered by Dieter Dierks and was first issued on Pilz in 1971.