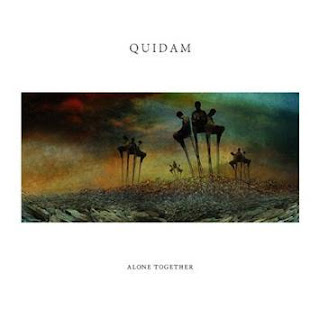 Quidam is a Polish Progressive rock band, evolving from the hard rock/blues trio Deep River, a band formed by Maciek Meller, Radek Scholl and Rafał Jermakow.[1] When Zbyszek Florek and Ewa Smarzyńska joined the band, the original Quidam line up was complete. In this line-up the debut album Quidam was recorded between September 1995 and March 1996.[2] The album was produced with guest appearances of three Collage members: Wojtek Szadkowski, Mirek Gil and Krzysiek Palczewski

The neo prog style guitar playing is interlaced with haunting flute, cello that evokes depth, female vocals and keyboards that give an orchestral fullness to the music. Their style is a melodic, text-based (female vocals) symphonic rock. The rhythms intensify, the symphonic keyboard textures thicken and the electric guitar plays long melancholic notes. QUIDAM is certainly the main and most appreciated act to have emerged from this field, with ABRAXAS and COLLAGE.