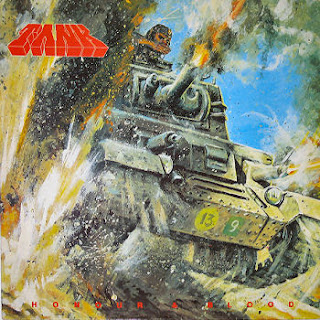 Tank is a British heavy metal band, formed in 1980 by Algy Ward, a former member of The Damned. The band is known as part of the new wave of British heavy metal movement. Tank was often compared to Motörhead as both bands, trios fronted by singing bassists, played a loose, almost punk-styled metal music with often colourful lyrics

Honour & Blood is the fourth album by the British heavy metal band Tank, released in 1984. By the time of this album Algy Ward was the last original member of the group remaining, as the Brabbs brothers had been replaced by Cliff Evans on guitar and Graeme Crallanon drums (reuniting Crallan with his former bandmate in White Spirit, Mick Tucker). The album follows much the same format as the band's previous album This Means War, with seven songs, several quite lengthy, of melodic heavy metal primarily about the topic of war. However, the band explores some different subject matter on side two, as "W.M.L.A." and "Too Tired to Wait for Love", express frustration in love, while "Chain of Fools" is a cover of the 1967 hit by Aretha Franklin