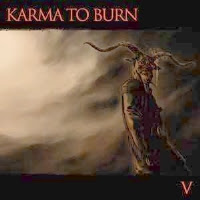 Their name comes from a sleevenote on Bob Dylan's 1976 album Desire which reads "I have a brother or two and a whole lot of karma to burn..."

V is the fifth studio album released by the traditionally instrumental stoner rock band Karma to Burn. It is their second studio release since reforming from their 7-year hiatus in 2009. It was released on May 27, 2011, via Napalm Records.[2] Unlike their previous releases since Karma to Burn, this is not an instrumental album. Only five tracks are instrumental; the other three feature vocals from Year Long Disaster frontman Daniel Davies, who had joined the group but left prior to the album's release.