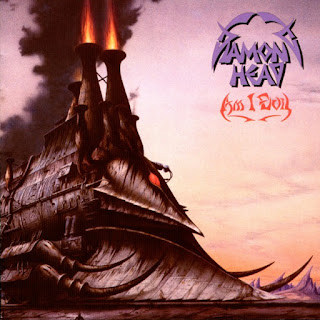 Diamond Head are an English heavy metal band formed in 1976 in Stourbridge, England. The band is recognised as one of the leading members of the new wave of British heavy metal movement and is acknowledged by thrash metal bands such as Metallica and Megadeth as an important early influence.

Am I Evil is a compilation album by the heavy metal band Diamond Head and was released in 1987 by FM Revolver Records before being re-released by Heavy Metal Records in 1994.[2]

This album contains early recordings of the tracks from Diamond Head's 1982 Borrowed Time, except "Call Me", plus two extra tracks "Dead Reckoning" and "Sucking My Love". The latter was previously released on the band's 1980 debut Lightning to the Nations. The former had already been released on two previous Diamond Head records. It appears on the Four Cuts EP and as a B-side to the single "Call Me"; both were released by MCA in 1982 (however, the 7" version of "Call Me" was only released in France).

The album is also similar to Borrowed Time by the fact that this album's artwork was done by Rodney Matthews, a British Illustrator from Somerset who had previously worked with bands such as Thin Lizzy and Scorpions.

The songs off this compilation are much less polished compared to their Borrowed Time versions. Many fans prefer the versions of the songs on this album as many blamed Diamond Head's previous label, MCA, of trying to over commercialize the band.