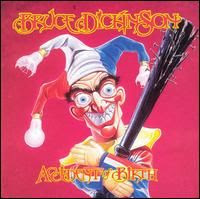 Paul Bruce Dickinson (born 7 August 1958) is an English singer, songwriter, musician, airline pilot, entrepreneur, author, and broadcaster. He is the lead singer of the heavy metal band Iron Maiden and is renowned for his wide-ranging operatic vocal style and energetic stage presence.

Born in Worksop, Nottinghamshire, Dickinson began his career in music fronting small pub bands in the 1970s while attending school in Sheffield and university in London. In 1979, he joined the new wave of British heavy metal band Samson, with whom he gained some popularity under the stage name "Bruce Bruce" and performed on two studio records. He left Samson in 1981 to join Iron Maiden, replacing Paul Di'Anno, and debuted on their 1982 album The Number of the Beast. During his first tenure in the band, they issued a series of US and UK platinum and gold albums in the 1980s.

Dickinson quit Iron Maiden in 1993 (being replaced by Blaze Bayley) to pursue his solo career, which saw him experiment with a wide variety of heavy metal and rock styles. He rejoined the band in 1999, along with guitarist Adrian Smith, with whom he has released five subsequent studio albums. Since his return to Iron Maiden, he issued one further solo record in 2005, Tyranny of Souls. His younger cousin, Rob Dickinson, is the former lead singer of British alternative rock band Catherine Wheel, while his son, Austin, fronted the metalcore band Rise to Remain.


Accident of Birth is a heavy metal album released in 1997 by Bruce Dickinson. It was published by Zomba Music.

This is the second album made in collaboration with guitarist/producer Roy Z and is therefore much different from Bruce's previous Skunkworks album. He was also assisted by another former Iron Maiden member, Adrian Smith, and the two would later return to the band in early 1999. Thanks to the slightly bigger success of this album, Bruce would work with Roy Z in the future on his solo albums The Chemical Wedding in 1998 and Tyranny of Souls in 2005.