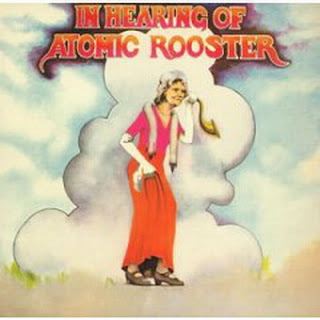 Atomic Rooster are a British rock band, originally formed by members of the Crazy World of Arthur Brown, organist Vincent Crane and drummer Carl Palmer. Throughout their history, keyboardist Vincent Crane was the only constant member and wrote the majority of their material. Their history is defined by two periods: the early-mid-1970s and the early 1980s. The band went through radical style changes, but they are best known for the hard, progressive rock sound of their hit singles, "Tomorrow Night" (UK No. 11) and "Devil's Answer" (UK No. 4), both in 1971.[5]

In 2016, Atomic Rooster reformed with permission from Crane's widow, with the new line-up featuring two members from the various 1970s incarnations of the band.

In Hearing of is the third album by British rock band Atomic Rooster. Although not included on the album, "The Devil's Answer" single was released just prior to it, becoming the band's highest chart success at number 4 in the UK. This helped push the album to a number 18 UK chart placing, despite the fact that the four musicians pictured on the inside cover never played together. The backing tracks (and some vocals) were recorded by Vincent Crane, John Cann and Paul Hammond, but Cann and Hammond were let go from the group soon after vocalist Pete French was drafted in. The finished album's sound was dominated by Crane and Hammond, with many of Cann's guitar parts either not used or placed lower in the mix. In addition, many of the songs were written by Crane, along with his first wife, Pat Darnell.