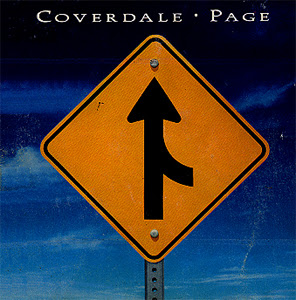 The project between the two artists commenced in 1991 at the suggestion of American A&R executive John Kalodner, as both artists were signed to Geffen Records at the time in North America.

Their debut album, Coverdale/Page was released on 15 March 1993, reaching No. 4 in the UK and No. 5 on the US Billboard 200 chart. Five singles were released to promote the album: "Pride and Joy", "Shake My Tree", "Take Me for a Little While", "Take a Look at Yourself" and "Over Now".

Prior to the formation of the duo, Page's former Led Zeppelin bandmate Robert Plant had been reluctant to reunite with Page.[5] In interviews at the time, Plant expressed some derision at the guitarist's collaboration with Coverdale, referring to the project as ‘David Cover-version’.[6][7]

An American arena tour was planned for the summer of 1993, but after sluggish ticket sales the tour was scrapped in favour of a series of concerts in Japan, after which the partnership was dissolved.[citation needed] Page subsequently teamed up with Plant for an "UnLedded" MTV project and Coverdale returned to Whitesnake.