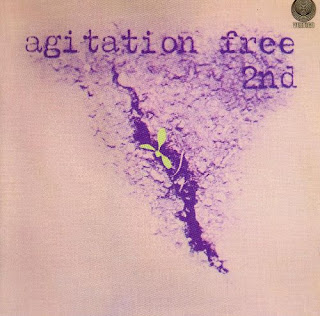 Agitation Free is a German experimental krautrock band, formed in 1967 by Michael "Fame" Günther (bass guitar), Lutz "Lüül" Ulbrich (guitar), Lutz Ludwig Kramer (guitar) and Christopher Franke (drums). They were initially called Agitation, a name they chose at random from a dictionary. The band had to change the name because another band with the same name already existed. Agitation Free was chosen based on a poster for a free show played in the early 1970s saying "Agitation Free" (meaning "free concert").
History

After losing guitarist Axel Genrich to Guru Guru in 1970 (Genrich having replaced Kramer the same year) and drummer Franke to Tangerine Dream in 1971, the band recruited Jörg "Joshi" Schwenke (guitar), Burghard Rausch (drums) and Michael Hoenig(keyboards). They released their first album, Malesch, in 1972 on the Music Factory label. The album was inspired by their tour through Egypt, Greece and Cyprus, sponsored by the German Goethe Institute. Later that year, they performed at the 1972 Munich Olympics.

A second album was released in 1973, and guitarist Schwenke was replaced first by Stefan Diez, then Gustl Lutjens. The band disbanded in 1974.

Agitation Free reunited in 1998, with the 1974 line-up, and released River of Return in 1999. The band again reformed in 2007 for a series of concerts in Tokyo. In 2008, remastered CDs of their back catalogue were officially released, and in 2011 they released Shibuya Nights, recorded at their 2007 Tokyo concerts. In 2012, the band toured again to promote this album.


Agitation Free's 2nd stands as one of Germany's finest instrumental rock albums of the 1970s and a classic for fans of progressive rock and Krautrock. Despite the fact that the group had problems keeping its cohesion at the time, these troubles never affect the music. 2nd presented a daring blend of Krautrock-type extended jams, laid-back attitude, and experimentation. The music remains very psychedelic in nature, more early Can than Faust. The presence of acoustic guitars and bouzouki emphasizes the easygoing nature of the music, along with Stefan Diez's elegant guitar soloing, while occasional free-form passages keep things on the edge. The opener, "First Communication," is pure Krautrock and the hardest-driving tune. It belongs on every anthology of German rock. Michael Hoenig's synthesizer experiment "Dialogue and Random" provides an interlude before the two-part "Laila" kicks in. The latter juxtaposes prog rock and fusion jazz sections with beautiful audacity. Side B of the original LP is a lot quieter. Birds chirp at the beginning of "In the Silence of the Morning Sunrise" and the pastoral mood carries over to the nine-minute "A Quiet Walk." "Haunted Island" ends with a midtempo rock number featuring a recitation of Edgar Allan Poe's "Dreamland." Filled with Mellotron and guitar jamming, it has often been hailed as a highlight by prog rock fans who had a hard time digesting the less immediate material, but it's actually weaker than what came before it -- without lessening the appeal of this album.