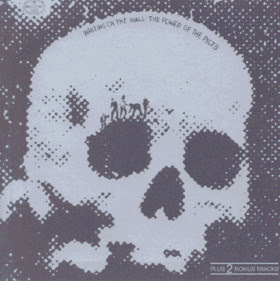 An Edinburgh band, who were originally known as The Jury. They moved down to London, changed their name to Writing On The Wall and were a popular attraction at London's Middle Earth Club. Their album didn't capture them at their best. The sound was flat and it was poorly produced. Bogeyman catches the ear. With its maze of interlocking riffs and driving rhythm it was the natural choice for the Middle Earth sampler Earthed. Child On A Crossing was not included on the album but was added as an additional track when the album was reissued in Germany on Repertoire in 1992. Two of the better tracks on the album were Aries and Hill Of Dreams, but also of note was the 'B' side to the single Lucifer Corpus, which had an excellent guitar solo and real menace.

Willy Finlayson left in 1969 being replaced by Robert Smith, who'd been in The Embers and Three's A Crowd. Soon after Smith and Patterson left but the band soldiered on until late 1973, releasing one further 45 for Pye.

Both sides of the Middle Earth 45 can also be heard on Filling The Gap (4-LP) and Visions Of The Past, Vol. 2 (LP & CD). Buffalo has resurfaced on Rubble, Vol. 10 - Professor Jordan's Magic Sound Show (LP) and Filling The Gap. It sounds pretty good to these ears. The band also signed to Tetragammaton in the US and they put out a live album, Live At Middle Earth, which is apparently better and much different to the UK release. It's also hopelessly rare. Wooden O recorded a version of Aries (Middle Earth MDE 201) 1969. Finally a version of The Small Faces Sha La La La Lee recorded at a John Peel session has resurfaced on Mynd The Gap (LP), and Ladybird can be found on Progressive Music (LP).

Patterson left the band to join Beggar's Opera, but sadly died in the early nineties. Robert Smith joined Blue. Certainly Writing On The Wall were the best progressive rock outfit to come out of Edinburgh.

Of their retrospective albums, Cracks In The Illusion Of Life contains both sides of a 1967 45, Words And Music / Peter Gunn, issued originally as The Jury. Also featured are two promising pop-psych tracks from 1968; Felicity Jane and Flight Of The Mind plus the more mainstream Katie's Been Gone. From 1972 there's the keyboard-orientated Fishers Of Men, but sadly most of side two is taken up with rather unimaginative hard-edged rock. Of this both sides of their 1973 45 for Pye, Man Of Renown, are the pick of the bunch.

Personnel:
WILLY FINLAYSON gtr A
ALBY GREENHALGH wind A B C
JIMMY HUSH drms A B C
LINNIE PATTERSON vcls A B
BILL SCOTT keyb'ds A B C
JAKE SCOTT bs A B C
ROBERT SMITH gtr  B