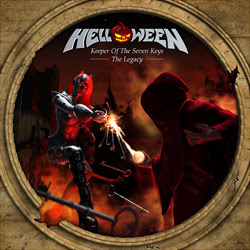 Keeper of the Seven Keys: The Legacy is the eleventh studio album by German power metal band Helloween, released in 2005.[2] It is the first album with new and current drummer Dani Löble and a continuation to their 1987 and 1988 albums Keeper of the Seven Keys, Parts I and II. The album is a double CD with nearly 80 minutes playing time and comes in a digipack with 6 flaps. It was produced by Charlie Bauerfeind (Blind Guardian, Halford, Rage) and features Blackmore's Night singer Candice Night on the track "Light The Universe".

When asked about what inspired them to make a third Keeper album, bassist Markus Grosskopf said:[3]
“ Actually there was somebody from the Japanese record company who told Weiki [Michael Weikath, guitarist] how happy he is with the new line up. He said something like 'That line up is really strong, with that line up you can make A KEEPER album' just to say how strong that line up is, that's the explanation. And the record company started thinking 'Why don't you do so?'. [...] then we thought 'Well, why don't we try it with that line up?' But then we decided to do it very different and not to copy, the actual thing was not to copy that old stuff, the good old stuff, but doing something new. [...] And it deserves the name, even if some people think it doesn't. ”


The intro of the song "Occasion Avenue" uses samples from "Halloween", "Eagle Fly Free" and "Keeper of the Seven Keys" with Michael Kiske on vocals. One of the samples is a clip from a previously unreleased live version of "Keys" with Kiske singing the first part of the chorus and the crowd joining in.