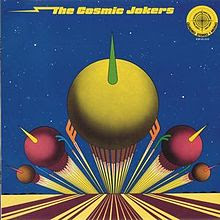 The Cosmic Jokers was never an ensemble, per se; its members did not play together as Cosmic Jokers, and in fact were not even asked to join the group. Their music was created from sessions put together by Rolf-Ulrich Kaiser and Gille Lettman in early 1973. He arranged for several acid parties to be held at the sound studio owned by Dieter Dierks, where musicians were offered drugs in exchange for recording tracks. Participants included Manuel Göttsching and Klaus Schulze of Ash Ra Tempel, Jurgen Dollase and Harald Grosskopfof Wallenstein, and Dierks. Prior to this, all of the musicians had been involved with Kaiser's Cosmic Couriers label.

Kaiser took the tapes from these sessions, edited and mixed them with Dierks, and released them on his label, Kosmische Musik, complete with the musicians' pictures on the LPsleeve, without asking for their permission. Göttsching did not find out about the record release until he heard it playing in a record store in Berlin and asked the counter help what was playing. Kaiser released five records under the name Cosmic Jokers in 1974, one of which was actually a label sampler and a second, Gilles Zeitschiff, consisted of Kaiser's then-girlfriend Gille Lettmann speaking over sounds taken from prior label releases. While none of the musicians were happy with the recordings, Schulze was so angry after the release of Gilles Zeitschiff that he sued Kaiser. In 1975, Kaiser was forced to discontinue and withdraw the recordings, and he fled the country over the affair, abandoning the record label over the threat of impending legal problems.