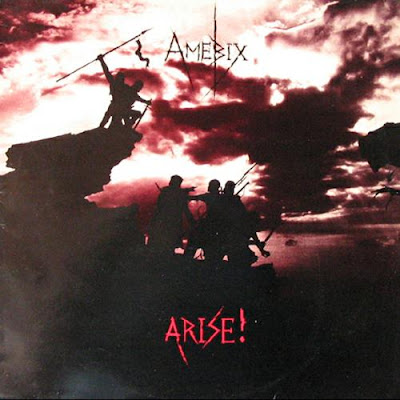 Amebix are considered one of the first - if not, the first - crust punk band and innovated the "gritty" sound of crust punk. The band, led by vocalist / bassist The Baron and guitarist Stig, formed at the tail end of 1978 originally dubbed The Band with No Name. One of these formative tracks, 'University Challenged', turned up on the renowned compilation album 'Bullshit Detector 1'.

A series of line up fluxes eventually saw keyboard player Norman being enrolled in 1981 as the group relocated to Bristol. Another inductee would be drummer Virus from local act Disorder and in this incarnation Amebix signed to Spiderleg Records issuing three EPs.

More line up changes, saw Amebix making do as a trio for a tour of Italy before the quickfire changes in the keyboard department settled when George came in during November of 1984 for dates in Holland, replacing Jenghiz on Synth/Keyboards.

Spider Arachno Blaster replaced Virus as drummer as Amebix signed to Alternative Tentacles for the 1985 album 'Arise'. Sophomore effort 'Monolith' arrived on the Wolverhampton Heavy Metal label but the band folded in late 1987. Spider, George and Stig stuck together to forge Zygote. In later years Spider would be found in Muckspreader. According to some reports The Baron went on to live on the Isle of Skye manufacturing swords(!).

My friend the time has come for us to say goodbye
So with these parting words I bid you fond farewell
It seems the life we led was just a shameful lie
What does the future hold? Well only time will tell
I'm not scared of dying and I don't really care
If it's peace you find in dying well then let my time be near
If it's peace you find in dying when dying time is here
Bundle up my coffin, 'cos it's cold way down there


Some say our fate is sealed and help to tie the knot
Some say that this may be the lull before the storm
But there's one piece of nature everyone's forgot
And that's, "The darkest hour is always before the dawn!"

When the candle burns low
When there's no more to say
Dig me a hole
Where my body might lay
Αναρτήθηκε από Knightmare στις 2:38:00 μ.μ.