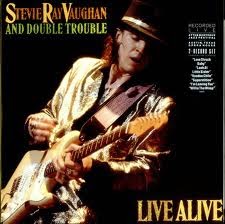 from wikipedia:
Live Alive is an electric blues album compiled from four live performances by Stevie Ray Vaughan and Double Trouble. The performances were recorded on July 16, 1985 at the Montreux Jazz Festival; July 17–18, 1986 at the Austin Opera House; and July 19, 1986 at Dallas Starfest. Much of the album was overdubbed in the studio[2]

The 1985 Montreux performance was much better received than the 1982 visit, when some of the crowd booed Vaughan's hard blues sound. The song selection for Live Alive displays many of SRV's biggest influences: Jimi Hendrix("Voodoo Child (Slight Return)"), Stevie Wonder ("Superstition"), Howlin' Wolf ("Commit a Crime"), and Buddy Guy("Mary Had a Little Lamb").

"I'm Leaving You (Commit a Crime)" is incorrectly credited on the album to C. Burnett, better known as Howlin' Wolf. Although Howlin' Wolf was the first to record the song on the album The London Howlin' Wolf Sessions, it was written byJames Oden. The title is also incorrect, because "I'm Leaving You" is a completely different song by Howlin' Wolf. The song is originally titled "What a Woman!", but is released in 1981 (after Wolf's dead) as "Commit a Crime" on the album "All Night Boogie". It is not unlikely that the title used on Live Alive was an honest mistake, since the lyrics start with "I'm leaving you woman, before I commit a crime". When Kenny Wayne Shepherd records the song for his 1995 albumLedbetter Heights he carries on the mistake and uses Stevie Ray Vaughan's title for the song, and also credits Howlin' Wolf as the writer.