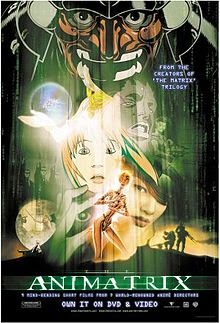 The Animatrix is a 2003 direct-to-video anthology filmbased on The Matrix trilogy produced by The Wachowskis, who wrote and directed the trilogy. The film is a compilation of nine animated short films, including four written by the Wachowskis. It details the backstory of the Matrix universe, and the original war between man and machines which led to the creation of the Matrix.


Storyline
Anthology of nine short anime (Japanese animation) films tied in to the 1999 blockbuster "The Matrix" and its sequels. "Final Flight of the Osiris": The crew of the hovercraft Osiris attempt to warn their city of an imminent attack. "The Second Renaissance, Parts 1 & 2": The story behind the war between man and the machines, how mankind scorched the sky, and the creation of the Matrix. "Kid's Story": A teenager is contacted by Neo, and manages to escape the Matrix. "Program": Two warriors battle in a samurai training simulation when one decides to betray his crewmates and re-enter the Matrix. "World Record": A champion sprinter manages to break free of the Matrix by sheer physical effort during a record attempt. "Beyond": A young girl searching for her cat discovers a haunted house caused by a glitch in the system. "A Detective Story": Private investigator Ash tracks a hacker named Trinity through the looking glass. "Matriculated": A group of humans capture a machine scout and insert ... Written by Alexander Lum
imdb
download
Αναρτήθηκε από Knightmare στις 7:48:00 μ.μ.