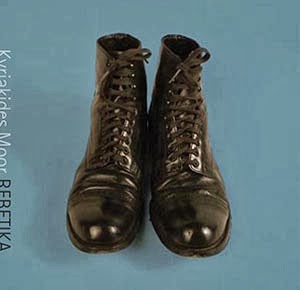 “ Andy Moor and Yannis Kyriakides ... have found a true middle ground that seems to be Greek folk music of the early 20th Century. Kyriakides, born in Cyprus but raised in the UK, might have grown up around it. Moor the anarchist might see some appeal in the barroom guitar songs often associated with the revolutionary movement ... Now they have something to talk about, and it's refreshingly new ... Moor plays guitar against a variety of backgrounds supplied by Kyriakides, including samples of scratchy old rebetika records ... Layers of strings meld together - bouzoukis from the past slide familiarly around a real-time electric guitar. Feedback and electronic tones sit comfortably alongside each other, only occasionally peaking in Exworthy frenzy. It's beautifully mysterious. ”


“ Netherlands-based composer Yannis Kyriakides collaborates with The Ex's guitarist Andy Moor for a February 2006 septet of live improvisations issued under the collective title Rebetika. Merging Moor's explorative post-punk deconstructions with dusty vinyl samples and experimental backings that reference traditional Greek music and bluesy lamentations makes for unique and unusual results. Over the course of 45 minutes, the two plunge headlong into episodes of squabbling noise and aurally recreate the final breaths of a dying species in the penultimate piece. ”