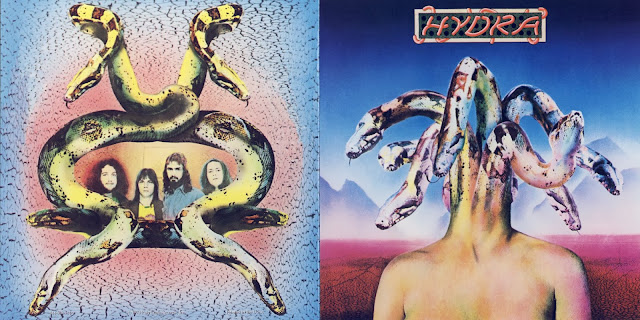 Hydra is an American Southern rock band founded in the late 1960s by Spencer Kirkpatrick (guitar), Wayne Bruce (vocals and guitar), and Steve Pace (drums). Pace and Kirkpatrick first played together in 1968 in the band Strange Brew. Wayne Bruce was playing with the band Nickelodian and accepted the offer to join Pace and Kirkpatrick in the short-lived Noah Mayflower. These three remained together in the band Osmosis until 1969 when, after enlisting a succession of bassists, Hydra finally emerged with the inclusion of Trip Burgess in 1970, and later Orville Davis in 1971. Orville remained with Hydra on their 1st two LP's before leaving the group to join the hard rock outfit Rex and then briefly Starz. Hydra's reputation as a solid live act in the Atlanta, Georgia area began to spread and the band expanded their territory.[citation needed] They began supporting major internationally known acts in concert.[citation needed] They have been referred to[by whom?] as the first heavy southern rock band.

The band signed a recording contract with Capricorn Records in 1973 and released a self-titled album Hydra in 1974. In 1975, Land of Money followed. The producer Dan Turbeville used a horn section (without the band's knowledge) on the first album and musicians likeChuck Leavell (Allman Brothers band, The Rolling Stones, and Eric Clapton) (piano and keyboards) and Randall Bramblett, who later founded his own Randall Bramblett Band, on the second