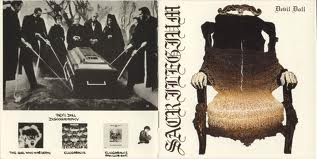 "Sacrilegium" ends at 43:30 followed by silence until 47:38 at which point a hidden track entitled "The Funeral" begins. It is an audio sample of a priest reading a eulogy and subsequent sounds of someone shoveling dirt into a grave. After this fades, Mr. Doctor's voice can be heard playing in reverse. He speaks for about 20 seconds and the track comes to an end.

When reversed, the words Mr. Doctor appears to be saying are as follows:

A part played with the accordion (starting approx. 13:51) is actually a traditional Slovenian song "Vsi so venci bejli".